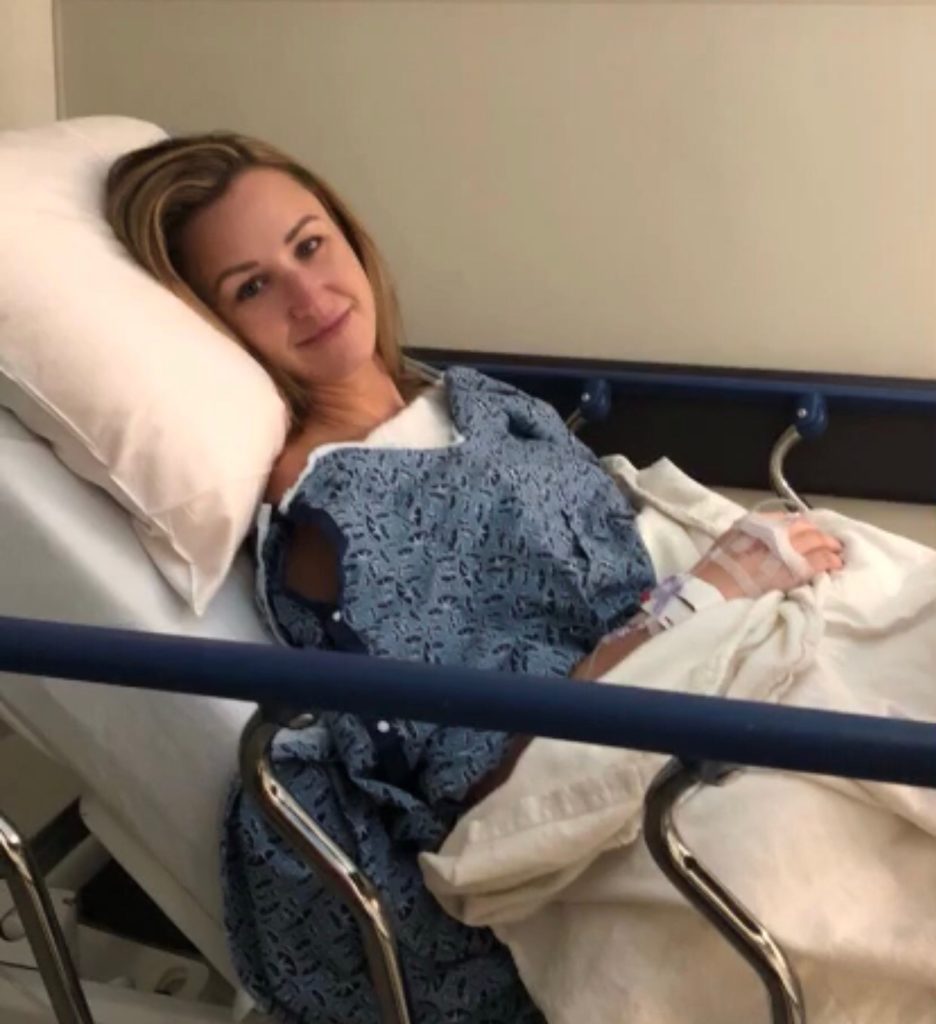 I officially blog about it all… okay I guess I really always have but ya know… I am now talking about my uterus. Four months ago almost exactly now, I had an endometrial ablation. But first, let’s back it waaaaay up! At the age of 12, I for some unknown reason decided to stop eating meat. I know true vegetarians/pescatarians totally roll their eyes at this statement in conjunction with the “I eat chicken sometimes” statement but I became one of those only seafood and then chicken once every blue moon kind of eaters. I legit have absolutely no reasons why but suddenly the thought of eating meat just started to truly gross me out. Related or possibly coincidentally not, I became anemic not even two years later. I was getting blood taken with my mom at the pediatricians office and I hit the floor immediately after standing. My bloodwork came back anemic and that’s when the struggles all began. From then on, my body and iron levels have never ever recovered. A problem that has plagued my health ever since. I know… I know… just eat some dang steak! Just not as simple as that I am afraid…

If you are male and are still reading this post for some crazy reason, please go right ahead and hit the X at the top right of my blog tab. Annnnd… thank you. So year after year after year, between heavy periods and already low iron levels, I bounced in and out of being severely anemic basically weekly. I got to where I could almost guess my own iron level just based on how sluggish I felt, how cold I would feel and how easily I was bruising. And then came my mid-20’s when I started having little ones. Although pregnancy was sooooo not my cup of tea, the 9 month long reprieve from my periods was HUGE in getting my levels stabilized for very long stretches of time. Fast forward quite a few years later to having then 8 and 2 year old girls, I went in for a routine bloodwork appointment and I got referred straight to a hematologist. The nurse had called and said my blood levels were waaaaay the heck off and that I needed to call this number and make an appointment. I called the number and the lady answered “Athens Blood & Cancer Center…” Uggghhh…

Long and even longer story short, my iron levels were so low that they told me I needed iron tranfusions and possibly even blood transfusions. As I have chatted about lots on some of my more personal posts like this in the past, I steer clear of absolutely anything outside of the norm medical-wise. I TOTALLLLY get that this isn’t “medicine” but that’s just how I have become wired after lots of medical issues in the past. I just always want soooo bad to just to get the ROOT of the problem. So stubborn me refused both and I decided instead to try everything on Earth to fix the situation myself. I took iron pills three times a day, I ate spoonfuls of black strap molasses, I drank chlorophyl… my mom even disguised chicken liver in brownies y’all. It was bad. LOL. After that for the next four years of my life, I have visited my hematologist at the blood & cancer center to get my iron levels checked every six weeks. No fun. At all. Also seems sooooo backwards since I am low on blood and have to get blood taken so often! I obviously totally know why but ya know.

About one year, or maybe not even quite that long, into my almost monthly hematologist visits, my doctor wanted to run some tests. She truly worried me that there HAD to be some underlying reason why my iron would get so so low. She suggested a colonoscopy and an upper GI. The colonoscopy to ensure I wasn’t losing blood through that “fabulous way” and an upper GI to rule out the same blood loss possibility plus a true Celiac test. Apparently if you have Celiacs Disease, your body does not properly absorb vitamins and minerals including iron. After, thank goodness, all of that testing came back normal, the discussion then switched to eliminating my menstrual cycle in some way. I have been “blessed” (insert rolly eye emoji) with debilitating migraines since college and I learned waaaay back then that birth control pills were part of the problem so I knew that option was out. I wasn’t personally a fan of an IUD or anything like that plus I know some have hormones like birth control that would worsen my migraines once again. So that option was out as well. My OBGYN then gave me two options… an endometrial ablation or a hysterectomy. My stomach literally felt sick at the idea of a hysterectomy. Although I know lots of women have had them and had no issues, the thought of it just kind of freaked me out. He also did say that results from an ablation can vary drastically from one woman to another so no matter what I chose, I could end up in a hysterectomy either way. But after chatting with several friends and acquaintances who have had ablations, I decided to give it a go!

Since first mentioning my ablation procedure on Instagram Stories last Fall, I have gotten blown up with messages from soooooo may women in my very same boat. Low iron levels looking for a drastic solution. This is why I have shared details on how very bad my anemia had gotten. All as to then share my amazing ablation results. So last September, after being told for almost two years now that I HAD to do something to get my iron under control, I scheduled an ablation. The first step is of course to make sure you are completely done having children and to triple check that you are for sure NOT PREGNANT. Although an ablation doesn’t always keep you from getting pregnant, it will prevent you from being able to keep a pregnancy. Scary thought. Next is an endometrial biopsy. This ensures that you do not have any cancerous cells in your uterus before they go blasting away at it during the surgery. I cannot say that the biopsy was my absolute favorite experience ever. Or at all whatsoever. It was a pretty dip snipping of the lining of your uterus which feels pretty much just like that. A knife cutting away at your insides. BUT it was super quick and by the time I felt it, it was over. Definitely not so bad that I wouldn’t advise having an ablation. And then finally, SURGERY DAY!

An endometrial ablation is a procedure that destroys/ablates the lining of your uterus. The goal of course being to permanently end or at least lessen the severity of a woman’s menstrual cycle. It is an outpatient surgery that you are put to sleep for which is a plus if you ask me. From what I understand, they burn off the lining which does NOT sound like something I EVER want to be awake for. They asked if I preferred a “twilight” drug or true anesthesia and I kind of stressed out over my decision! I chose the “twilight” drug which I think was Propofol. Otherwise known as the drug that killed Michael Jackson. Which is literally what my nurse told me. AWESOME! Thanks for that. I was worried I would be awake-ish but I do not remember a thing! I woke up feeling okay but I knew they said there was a possibility I would have some moderate to severe cramping post-procedure. Pretty sure I was pumped full of stuff at that point because by the time I got home, I was cramping pretty severely. I do have a bladder disease (interstitial cystitis) which I have chatted about before here on my blog and I have found that my menstrual cramping tends to be worse because of it for some reason. And it was. I would say it was allllmost unbearable for about five hours post-surgery and then it literally just STOPPED. I laid on a heating pad and took Motrin during that time and then once it was over, I haven’t felt a thing since!

From literally that moment last September until now, I have not had a single drop of blood and not a single cramp. I literally don’t even know when my period “should be” anymore! Y’all… my period is GONE. Like throw out the tampons and pads and never ever see those again. Until my girls start. Ugh, can’t even handle that thought! And honestly for me, even better than that is the fact that I am NO LONGER ANEMIC. My hemoglobin is no longer low at ALL anymore. Truly the biggest blessing in the world. I hope that if you have been struggling with anemia or even just miserable periods, this post helps you make a very difficult decision. I know that even for me, knowing for 1,000% that I am all done having kids, it was a hard one to make. To KNOW that you can physically never have a child again is a hard thing to sign up for. BUT a higher quality of life for those of us struggling with female issues can absolutely be worth the uterus blasting. Feel free to shoot me an e-mail if you have any other questions! Love you guys!

SHARE THISFOLLOW ME
« The Cutest Amazon Women’s Tops All UNDER $30!
The Top 10 Most Popular Amazon Fashion Picks from 2018! »